Over 30 years of experience - We provide customers worldwide

Easy Domes offers sustainable and pre-produced building sections for anybody who wants a high quality house.

The Easy Domes concept is developed by and at the architectural office, KT-Architects, of Kari Thomsen in 1989, a few years after the office of was established.

From the first project being a request for a cultural house to The Society of Greenland People on Faroe Islands, a later development financed by the Faroe Islands Ministry of Industry took place in cooperation with needed engineering advice to achieve the special dome load structure in minimizing use of material and to build two tourism cottages in a mountain area.

Some years later Easy Domes established a cooperation with the danish wooden factory Taasinge Trae and delivered two domes for two families in Denmark. By public marketing mainly on the internet an agreement was made in 2010 with the owner of the Golden Tulip Hotel and Resort in United Arab Emirates. Here two small domes were added to a bigger dome for beach spare time activities.

We are honored to have been recognized by A’ Design Award & Competition 2013 bronze in the categori Architecture, Building and Structure Design for the dome design of the Cultural House for the Society of Greenland People in Faroe Islands.

Superwood offers pressure and full impregnated PEFCcertified spruce boards without heavy metals, and in general delivered in the US-Kvinta quality and with a moisture content of 16–20 %. The impregnated wood acts as untreated spruce relative to i.e. weather graying, and is by the unique impregnation protected against rot, fungus and mold with accordance to DS/EN 335-1. The wood is non-toxic and disposal as traditional combustible waste. In 2004 Superwood Ltd received the EU environmental award.

Taasinge Elementer is a leading manufacturer of prefabricated wooden roof and facade elements.The company has process and product development and is by time in research projects within governmental technical institutes. Projects are tailored to all kinds of construction using computer technology, – delivered for estates, culture and sport, schools, institutions, to factory and storage buildings.

Bøllemosen Døre & Vinduer Ltd. is a industrial production company specialized in producing windows and doors in wood, wood / aluminum and mahogany. Bdv. manufacture products of high quality and make great emphasis on a high level of service and timely delivery. Demands are on full sustainability to the origin and produktion of the raw materials which all are FSC certified.

Povl Sørensen A / S is a company with more than 35 years of experience as a total supplier of sheet metal blanks, facade cladding and forging work with or without surface treatment, for construction and industry.

The company was founded in 1969 and is now running on the third generation, which has an ambition to expand the company even more, with a focus on sheet metal processing. 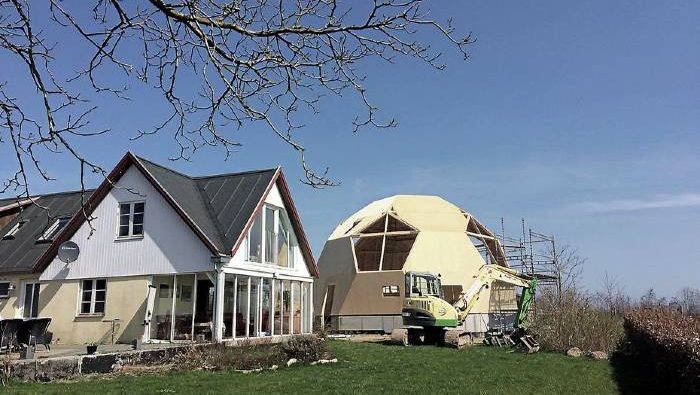 Each dome is designed and manufactured for personal wishes on room arrangements, windows, in- and out- side building materials,  flooring, water- and energy supply a.m. Easy Domes are being produced by KT-Architects.